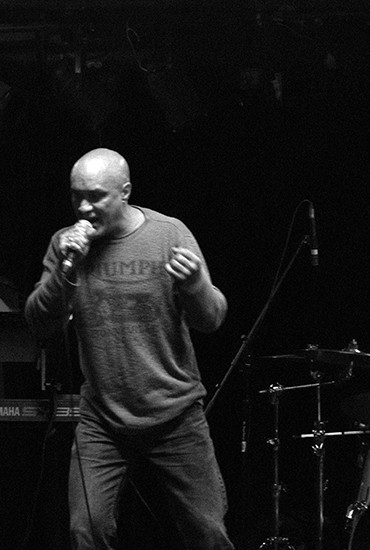 Dan Reed was born in Portland, Oregon, USA on February 17 1963. Dan was adopted and moved to a farm in South Dakota in a farming dominated landscape. Dan says that he felt he had to excel in everything he did – “I worked really hard in school and on the farm. I got up every morning at four to check the cattle. That instils a work ethic”.

Dan studied martial arts for eight years – the evidence of this can be seen on stage. And then Dan Reed discovered how to play guitar. A Japanese exchange student lived with the family for a year and taught Dan guitar. He showed Dan how to open his mind to other cultures and how to play acoustic guitar. Dan applied his work ethic to music. He studied acting and music at school, but dropped acting as a potential career. Being in the mid-west USA, Dan was exposed to music from the east and west coast – the mix included AC/DC, Van Halen, Free, Bad Company, Sly and the Family Stone, Cameo and Parliament.

Dan dropped the acting and concentrated on music. In 1979, Dan Reed met Dan Pred at a music store – Engle’s Music in Aberdeen and they formed a band – NIGHTWING – and won the annual talent contest at high school. Nightwing continued to perform in pool halls and at high school proms. But Dan was serious about his music and knew he had to get out of South Dakota to pursue it. He left for the West Coast in 1981 but had to leave college because of the pressure of gigging every night and studying during the day.

Dan then moved to Portland, Oregon, with the sort of music he wanted to play in his mind – “A lot of R&B but with raging guitars like AC/DC, Van Halen and Kiss”. All he had to do was find musicians that fitted into that scheme. Dan hung out at music stores, playing guitar and meeting other musicians, eventually joining the bar band Nimble Darts as a keyboard and guitar player. Nimble Darts performed on the college and club scene. Through that, Dan put together a mailing list – The Dan Reed Network – to let people know where they were playing.

After the Nimble Darts disbanded in 1984, Dan formed his own group with Dan Pred, who had moved to Portland, and Brion James – a guitarist he met in Seattle and convinced to move to Portland. Dan Reed Network was born. The first line-up was completed by Melvin Brannon on bass, who kept bugging the guys for an audition, and Jeff Siri on keyboards.

Despite the marketing of Dan Reed Network, and record company projection of Dan Reed as a status sex symbol, he defied the image, and famously, shaved his head during the Slam days, the night before they were due to shoot the video for ‘Rainbow Child’.

Dan Reed had been working on a number of solo projects whilst Dan Reed Network were still active. He provided guest vocals for various projects and was aloso involved with producing acts. Dan formed Hypedreamz studios in Portland and worked on film & commercial music as well as producing bands.

During this time, Dan moved into other things – principally acting – on stage and in film and writing screenplays. In 1992, he played the lead role, Torch, in the play ‘Beirut’ and also provided the soundtrack by Live Or Die.

In 1993, Dan Reed met the Dalai Lama, and interviewed him for Rolling Stone magazine.

Dan Reed went on to a have a few film appearances included ‘Zig Zag’, originally entitled ‘Mud Therapy’, which he wrote and produced, ‘Lake Consequence’, and ‘Even Cowgirls Get The Blues’ – although Dan’s scene was cut from the final movie. Stage appearances included A Buried Child and others.

Dan also created a production/record company – Hypedreamz, and released albums by several bands on this label.

Dan’s full return to music came with Adrenaline Sky – most of the rest of the band came from Maggie’s Dream (who in turn formed part of Lenny Kravitz’s backing band). The band released two albums and played a few live gigs across the US.

Back in Portland, Dan bought, and ran the Key Largo Club and re-named it Ohm. Dan recorded two songs as a project G-13, which became Odyssey – an album ‘Oceans of Sand’ / ‘Untangled Daydream’ was scheduled to be released on Eon Records but never saw the light of day.

Other projects include the production of Ohm’s Tuesday night house band Dahlia’s debut CD Emotion Cycles and a remix of TV:616’s ‘Sickness

Dan has since been candid about this time and his descent into drug addiction. Realizing things had to change, Dan left Portland and lived in India with monks, and in Israel for a few years. He cleaned up his act, and came back to music with his first solo album, ‘Coming Up For Air’.

In May of 2008, Dan Reed returned to the stage, in his ‘hometown’ of Portland, Oregon at the Aladdin Theater.

This renaissance has resulted in several more studio and live albums, and numerous shows across the US and Europe. Dan is very active on social media, interacting with fans that have become friends.