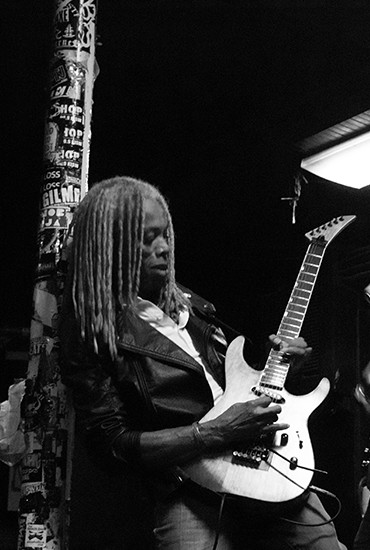 Brion James was born in Brooklyn, New York, USA on July 17, 1955. He comes from a long family musical background. His dad is a trumpet player. Brion himself played cello from the age of eight to 15.

Brion moved west from New York city. He studied at the Cornish School of the Arts. Because of his classical background, he also had offers from the School of the Arts in Paris, Berklee, Manhattan, Juilliard and GIT. By now, Brion was gigging regularly, sometimes in solo support slots to Allan Holdsworth and Stanley Jordan, but mainly learning the group thing with cover bands.

Brion was on the road with various Top 40 acts playing AC/DC and Led Zeppelin songs. Then, Brion took a trip into Portland to check out as many bands as he could, and stumbled across a band called Nimble Darts – with a certain Dan Reed on keyboards and guitar. After the gig, Brion commented to Dan: “I like your songs and I like your style”.

Three weeks later, Brion received a call saying Dan really wanted to get hold of him. They met on Brion’s next time in Seattle and Dan told him of his vision. Brion again: “We talked and we both had a lot of songs demoed and I had a dream about meeting a guy like him, and we just put our heads together. Sure enough, the songs sounded like they were written by the same mind – the rest is History!”

In a strange twist of fate in May 2001, Brion then joined Edgar Winter’s band along with Melvin Brannon. Unfortunately they never recorded together. They only played live across the USA. In August 2001, Brion then moved on to join Babyface’s band in August 2001 after playing guitar on a couple of tracks on his new album.

Brion continued songwriting and producing. He moved to Roatan (Honduras) to live the beach life. He recorded two solo album ‘Snorkel Test’ and ‘Meditations’. He keeps bees, dives, and plays shows in bars on the island. He has returned to the Pacific NW several times to play solo shows in Portland, and Scappoose.