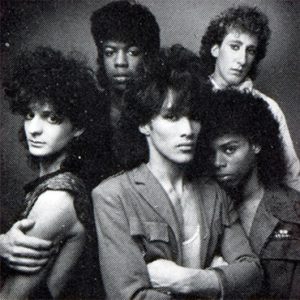 Dan Reed Network were often described as a multi-racial funk-rock band from Portland, Oregon. Great things were expected and predicted for the band, both through their music, and the image they portrayed. However, after three studio albums, and a best-of compilation, the band parted ways and the jump to the big le agues never happened. This was despite extensive touring and strong support slots, incredible live shows, and strong European support and radio play; in the US, the Pacific Northwest hometown crowds and support were immeasurable, but beyond that, the nation did not quite beckon.

The origin of the band actually started in Aberdeen, South Dakota, in 1979, where high school students Dan Reed and Dan Pred formed a band called Nightwing. Dan Reed moved to Portland in 1981, joining the band Nimble Darts to play keyboards and guitar. Dan Pred moved to Los Angeles in 1982, but then moved to Portland in 1984; After Nimble Darts disbanded, Dan Reed and Dan Pred formed Dan Reed Network, with the addidion of Brion James on guitar, Melvin Brannon on bass, and Jeff Siri on keyboards. They recorded one single, ‘Eye On You’ on Tandees Records. Jeff Siri was replaced by former Quarterflash keyboardist, Rick DiGiallonardo. They recorded an EP, ‘Breathless’ on independant Portland label, Nu-Vision Records.

By 1987, Dan Reed Network came to the attention of Polygram / Mercury and signed with them. Blake Sakamoto replaced Rick DiGiallonardo on keyboards, and the classic line-up was complete. The debut album, eponymously titled, was released in 1988. It was produced by the legendary Bruce Fairbairn, fresh off producing Bon Jovi’s ‘Slippery When Wet’ and Aerosmith’s ‘Permananent Vacation’. The lead single ‘Ritual’ reached #38 on the Billboard Charts. US & European tours followed, including a date in London at the Marquee Club. 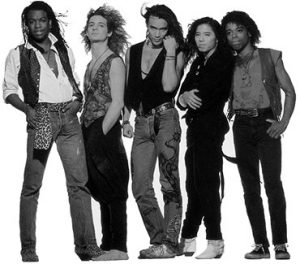 The band returned to the studio to record the incredible follow-up album, ‘Slam’, with another legend, Nile Rodgers. Somehow, depsite tours with Bon Jovi in arenas, and then the Rolling Stones in stadiums, in the UK and Europe, DRN were unable to build on the momentum and success of the first album. The media and radio play in the UK and Europe was strong, but somehow did not transalte into the big leagues. Outside of the Pacific Northwest, US media attention was disappointing. During this time, Dan Reed famously shaved his head, and removed the trapping of his image. But the record company did not share his view of identity and struggled to accept his decision, and did not know how to market a bald artist.

Dan Reed Network paired with Bruce Fairbairn again, and returned in 1991 with ‘The Heat’. Lyrically, the album was politically charged. The album was actually the most successful for the band in the UK, but elsewhere, the label could not figure out what to do with the band. Promotion was non-existent, and only one video was produced, for ‘Mix It Up’. The band funded a second video on their own for ‘Long Way To Go’. Slowly, things unraveled with a lack of label interest and support. The band toured Australia, supporting the Baby Animals, and then in 1993, a ‘Best of’ album, ‘Mixin’ It Up’ was released, with a small final tour of Europe. Demos of songs for a 4th studio album had been recorded, and some of these found life in solo and other band recordings. Officially, Dan Reed Network did not disband, but each band member went on to their own solo endeavours.

It seemed like the Dan Reed Network were resigned to the Band that almost did, and certainly should have. Each band member had, and still has, successes in their solo careers. Details of these are recorded elsewhere on this site.

In 2007, Dan Reed Network were inducted into the inaugural Oregon Music Hall of Fame, in Portland, Oregon. Dan Pred and Blake Sakamoto accepted the award. With the advent of social media, all of the band members came closer to their fans through their solo careers. The interest in Dan Reed Network reuniting never went away. Although it seemed like an impossibility, the stars aligned on 4th August 2012, and, at a Dan Reed solo show at the Star Theater in Portland, Oregon, Dan Reed, Dan Pred, and Blake Sakamoto, announced that they were getting the band back together for a special one-off show on New Years’ Eve 2012 at the downtown Marriot in their hometown.

After a few studio rehearsals, Dan Reed Network returned to the stage on December 30th 2012 for a special VIP Rehearsal show before the New Year’s Eve performance. With only a little rust, and some minor technical difficulties, DRN carried on from where they left off. Everything that made a DRN live performance special was still there, and they carried it over into the main New Years’ Eve show the next night. Dan Reed Network were back on stage, and over the next three years, DRN summer and fall shows would dovetail with Dan’s, and the rest of the bands’, solo careers. Annual treks and concerts in the Pacific NW, across the UK, and at major European rock festivals proved that the interest in the band was as strong as ever.

In 2015, Dan Reed announced that Dan Reed Network would enter the studio to record a fourth album, to be released 25 years after ‘The Heat’ in 2016. This news was accompanied with another piece that Blake Sakamoto would be leaving DRN to concentrate on his other musical ventures. In his stead, Dan’s long-time friend and musical collaborator, Rob Daiker, would take over on keyboards. The album, ‘Fight Another Day’ was released on June 3rd. The band recorded it largely in Portland, Oregon, at Falcon Studios, and Rob Daikers studio, The Commune. It was followed up with a small CD release tour across Europe.

Through 2016 and 2017, Dan Reed Networked toured Europe, the UK, and the US in support of “Fight Another Day”.

2017 saw the process of a new album in the works – eventually to be titled “Origins”. The recording of “Origins” was very different to anything that has come before, and probably unique among any recording artist.

All eight tracks were recording at live studio recording sessions with an audience of supporters in the room. For this first album recorded in this way, two tracks were recorded at each session – one new song, and one re-imagining of an ‘old’ song. There were 4 live recording sessions. The audience at each session witnessed tracking of drums, bass, guitar, keyboards and vocals. But more than that, they participated, providing backing vocals for each song.

The first studio session was in Manchester England, in December 2017. The following three sessions were May 2018 in New York, and Portland, USA; and then Stockholm, Sweden in July 2018.

“Origins” was released in November 2018, with a UK tour to back it up in the same month.