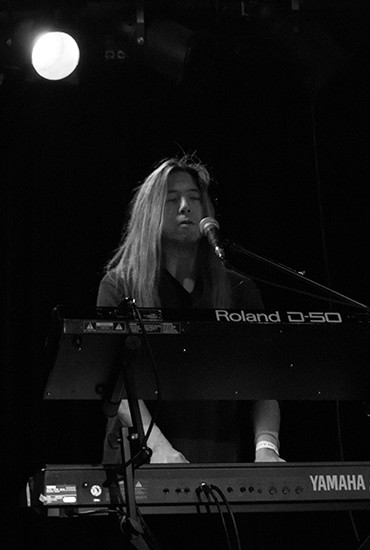 Blake Sakamoto was born on August 22, 1961 in Portland, Oregon, USA. Blake had a very extensive musical training. This included thirteen years of piano, three of those studying with Pat George, and five years of classical voice training. Blake also studied music at Portland State University and Portland Community College. Blake played in a few bands in the 70s, including the LA based band Dear Mr. President.

Blake saw Dan Reed Network for the first time in February 1985 and liked them. Right from the beginning, Blake wanted to join this band. Melvin and Dan Reed saw Blake in Dear Mr. President in 1986 at a gig in Portland and knew they had to have him in the band. It took a lot of working out, but finally, in March 1987, Blake was invited to join by Dan Reed.

Blake completed the picture for the definitive Dan Reed Network line-up which remained stable until what seemed to be the end. With Dan Pred, Blake was a driving force in keeping the band alive afterwards – they co-produced the ‘Live At Last’ CD & VHS.

After Dan Reed Network, Blake worked in various projects, most notably with Dan Pred in Generator which subsequently became Slowrush. Dan and Blake both left Slowrush following certain difficulties. These difficulties led to Dan and Blake playing their last Slowrush show at the CD release party at Ohm club, Portland, on 22 February 2000.

Following that, Blake went on to be a musical force in the Portland area. He continues to be so to this day. He has played with several bands – Black Barrel (formed by ex-Animotion member Bill Wadhams), 28 If, the Brian Cutler Band and the reformed Animotion at a gig in August 2001.

When Dan Reed returned to Portland for his solo shows, Blake often played keyboards, and provided backing vocals. Blake was instrumental in the band reuniting in 2012. He toured with the band from 2012 to 2015. However, when the time came to record ‘Fight Another Day’, Blake chose to pursue his musical career ambitions and the many projects he was involved in, handing over the keyboard reigns to Rob Daiker.

Blake continues to be a local musical force. He promotes bands and shows through ‘Blake Sakamoto Presents’. He is the lead of The Nu-Wavers; he choreographs the largest July 4th firework display in the west, at Vancouver, WA; he played with Hit Machine; he is the musical director at a local university. And so much more. He is always making plans…