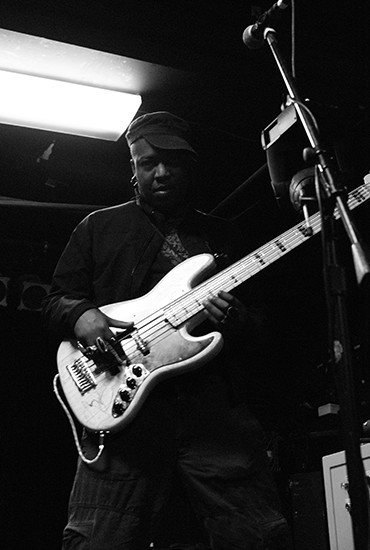 Melvin Brannon was born on July 6, 1962(?), in Seattle, Washington, USA. Melvin studied music at the Mount Hood Community College. He played in various bands – including Top 40, jazz-fusion, funk, blues and rock bands. This showed Melvin’s incredible talent and ability to play any style of music.

Melvin joined the Dan Reed Network after allegedly hassling the guys for an audition. And then they heard him play….

From 1994, Melvin recorded with, and then toured with Stevie Salas in Japan & Europe (including the Garage in Highbury, London, just up the road from Seven Sisters Road (!)) – that was some gig and I couldn’t have been more surprised when I saw Melvin up on the stage with Stevie. In total, Melvin Brannon appeared on six Stevie Salas albums.

Back in Portland, from 1997, Melvin recorded a couple of albums with a trancey experimental band called ‘Land of The Blind’; he also recorded with Ritchie Kotzen.

And in 2000, Melvin joined Edgar Winter’s touring band. He was joined by none other than Brion James for most of 2001 (until the summer).

Following that, Melvin recorded his own solo music as Spoony B / M-Cat Spoon-e. He has played with legendary blues and jazz artists, most notably, part of the Booker T & The MGs live touring band.