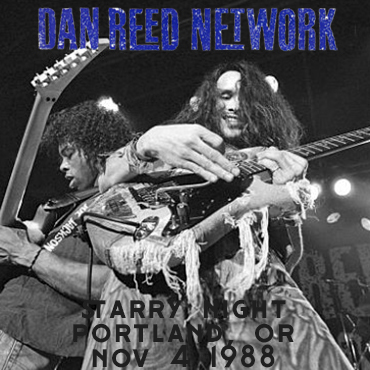 This is a radio broadcast recording of Dan Reed Network at the Starry Night theater (later renamed as The Roseland) in Portland, OR in 1988.

The radio broadcast was by Q105 (Portland) radio. This was the first of two nights at The Starry Night theater. A video of this show was shot and some of it should appear on the Origins documentary DVD.

This live show has a new song, “Sing To Me”, that was never recorded. It is preceded by a beautiful guitar solo by Brion.

There is also an early version of “Love Don’t Work That Way” that eventually ended up on “The Heat”.

The real gem, for me at least, is the only appearance I have, of “Let There Be No More Walls Between Us” – it was recorded for Slam, but dropped. It did not even make a B-Side. Dan & Brion spent three days living under the Burnside Bridge, with some homeless people in Portland, OR, and that inspired this song.

This show was also filmed and exists in my VHS collection.