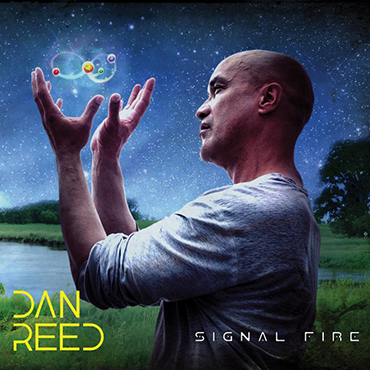 Dan Reed’s sophomore album followed the direction set in “Coming Up For Air”, but with an evolution of the sound.

This album was recorded at Rob Daiker’s studio in Portland, OR, and at Zero One Studios in Prague.

“Avalanche” was written by the singer-guitarist, Justin Lavash – born in England, but now, like Dan Reed, living in Prague.

The music for “Indestructible” was co-written by Dan Reed, and Seattle keyboardist, Brook Lizotte.

Early demos and tracklistings for this album were very different to the final product. Some of the songs from those early sessions, and live shows at the time, were ultimately recorded on the solo acoustic album “In Between The Noise”.

The CD was funded by fans through Pledge Music, and reached 140% of the original goal. Incentives included oil paintings by Dan, and a download of home demo recordings of songs from “Signal Fire”.

Dan Reed Network previewed a song called “Sing To Me” at live shows in 1988, but it was never recorded. “Sing To Me” on this album is a different song.