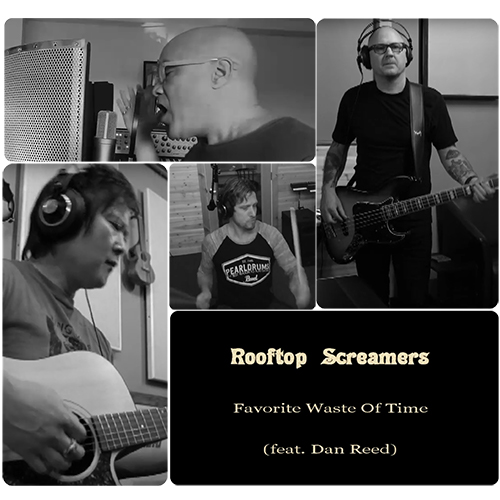 Rooftop Screamers is a Portland band started by Mike Collins. Mike drummed for Dan at his early Portland area 2008-2009 shows when he returned to music.

Also playing on this song are Kevin S. Hahn and Dain Ryan.

Dan recorded his vocals and filmed his performance at his home studio in Prague, Czech Republic.

I had to make my own replica version of the single cover as I could only find a tiny image.

Here is the video for the new song “Favorite Waste Of Time” (feat. Dan Reed). BIG thanks to Dan Reed for taking time out of his busy schedule to record the vocals AND record some video at his studio in Prague.
And I also have to thank Kevin S. Hahn for the use of his studio-Primal Recording Studio to videotape performances by himself, Dain Ryan and myself. And last but not least, thank you Scott Weaver for donating your 4K camera that allowed us to get such high def footage.
Hope you enjoy it!