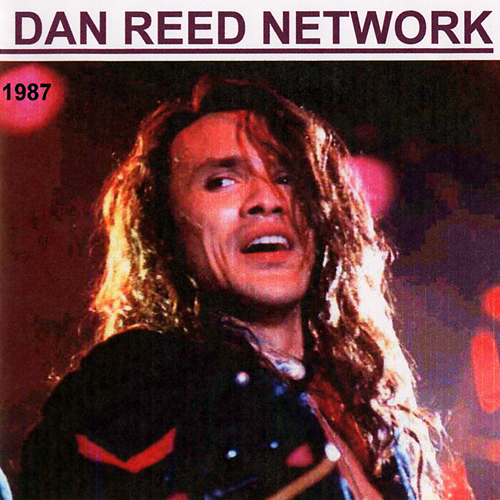 A fantastic CD with a glimpse of the early Dan Reed Network as they metamorphosed into the DRN we know and love – this captures them between Breathless and the debut album – the keyboards are much more evident throughout the songs.

This CD-R is labelled as Portland 1987. The venue and date is uncertain, but from Dan talking during the show about venues played, it appears that this show was actually in Seattle. Dan tells me this is likely the Hall of Fame Club in Seattle, and this would be in early 1987, before the band went in to record the eponymous debut album.

Three songs didn’t make it onto the debut album and were in fact not recorded at all – “Don’t Make Me Wait”, “Groove Me”, and “Wild Lover”.

“Living With A Stranger” eventually turned up as a B-side in 1991 on “Baby Now I”. However, the live version is quite different – very keyboard driven.

“Don’t Make Me Wait” is a poppy keyboard number and the bridge sounds exactly like The Temptations’ “My Girl”.

“Groove Me” is a low-down, well, grooving, song.

“Another Fire” is a very very early version of “The Heat”, sounding quite different, but with some of the lyrics making it onto the later song.

“Wild Lover” is quite rocking, with an amazing solo spot from Melvin Brannon.