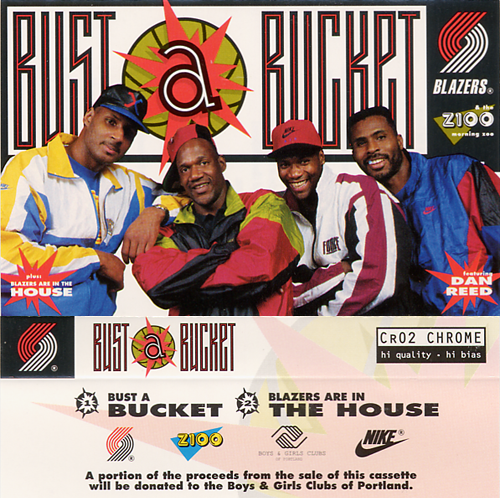 Every year, Z100 Portland Radio (KKRZ) released a song for the Portland Blazers Basketball Team – the annual fight song. In 1992, Dan Reed sang the lead vocals on the title track ‘Bust A Bucket’. The raps were by Top 20 major label local group U-Krew.

This was only released on cassette and was only available in the Portland area.

The Portland Blazers were on another trip to the NBA finals. ‘Bust A Bucket’ features team members Kevin Duckworth, Terry Porter, Jerome Kersey and Buck Williams.

The cassette sold 30,000 copies (the most of the annual Blazers fight songs) and $80,000 went to the Boys and Girls Club Of Portland.

A video was made to accompany the song was released as part of the Morning Zoo Yard Sale – 15 Years of Crap CD and DVD set. It is also available on YouTube.

“Bust A Bucket” received a Crystal Award for 1992 Song Of The Year from the Portland Music Association.

The Portland Trailblazers were playing for the championships against Michael Jordan and the Chicago Bulls. They lost 4-2.

“Bust A Bucket” continues to be the favorite Blazers song from a large number of Blazers Fans. 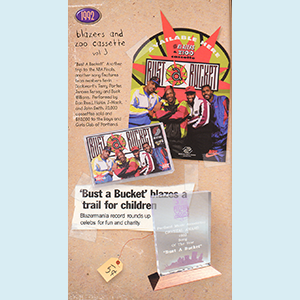