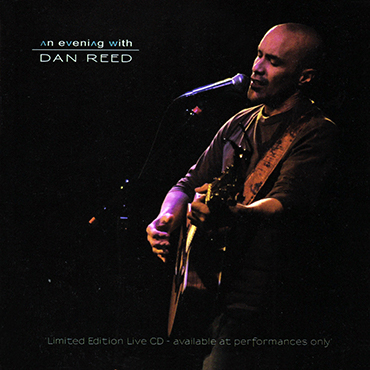 On May 24th 2008, Dan Reed returned from his self-imposed musical and personal exile, with a Dan Reed Band show at the Aladdin Theater in Portland.

The musical direction was a big change from everything that had come before in all variations.

Dan followed the Aladdin show up with several Portland and local area shows, sometimes solo, and sometimes with a band, through the summer of 2008.

At several shows in Portland, Dan’s set was preceded by a short Tuvan throat singing intro by an artist, (and friend), by the name of Soriah.

In the spring of 2009, Dan Reed played a West Coast tour, with stops in Phoenix, AZ; L.A.; Seattle, and Portland.

Two of the shows – March 6th in Phoenix, AZ, and Portland at Dante’s on March 7th were recorded. Songs from these shows were released on this CD.

Dan started to record his new solo album “Coming Up For Air” in Portland. But before that came out, Dan released “An Evening With Dan Reed” for sale only at live performances.

Eight of the twelve tracks came from the Portland Dante’s show. Four came from the Phoenix show (“Promised Land”; “On Your Side”; “Ritual”; “Brave New World”).

Soriah’s Tuvan Voice Intro was immortalized on this CD.

“Ritual” from this CD also was donated for a Portland compilation CD benefiting homeless charities.