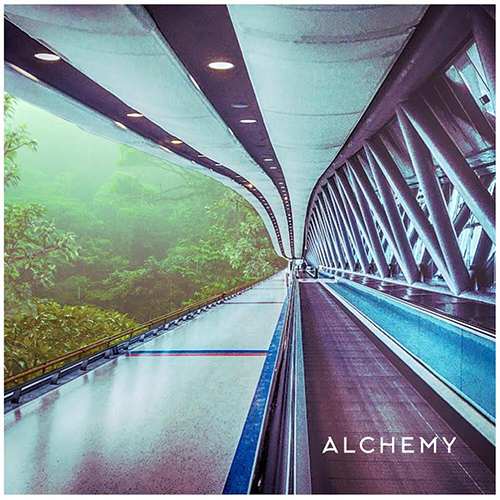 As artists we often get caught up in creating the ‘new’… a new canvas that begs for color, a new song eating away at us to be written, new horizons… but we often overlook sitting back and enjoying the work once it’s done. At least this has been true on my journey. Last night I took the time to immerse myself in a project that I originally composed and recorded over a 30 day period as a meditation album for a wonderful truth sayer named ‘Leah Allen’ a couple years back and was based on resonating 6 chakras that exist within the human body (and most likely in many other sentient beings). This project evolved further last year when I asked pianist ‘Brooke Lizotte’ to add his majestically melodic grand piano musings. Magic began to take shape! Adding to one of the six 10 minute instrumental soundscapes is the talented ‘Auditory Sculpture’… a track which is based on one of his inspiring tracks from his album ‘Lagom’. This new album ‘Alchemy’ is a one hour orbital transmission of off world soundscapes for the mind, body and soul and has become one of my favorite creative projects to date. I am very much looking forward to you all hearing it and getting your thoughts! ‘Alchemy’ will be released in late June on CD, iTunes and other streaming services, so please stay tuned. Artwork by the always awesome ‘Planet Twig’. Mastered by Ian Kelosky and Rob Daiker.

Dan wrote the following on July 22nd 2019 with the official announcement of the release date.

Honored to announce the release of the first track from the new ‘Alchemy’ Meditation/Relax Instrumental Album, and the ‘PRE-SALE LINK’ for the new CD which will be delivered worldwide on September 1st, 2019 to all those who are interested in checking out this hour long musical journey that I originally composed and recorded for energy worker Leah Leah Allén! I then asked our soul brother and consummate pianist Brooke Lizotte to add his magic, and with that ‘Alchemy’ has now become one of my most cherished musical projects to date! I hope you will enjoy it as much as we did creating it 🙂

The album consists of six 10 minute tracks which are based on six of the chakra’s found in the human spirit body.

I’ve also created videos for four of the six tracks which will be released each week on my YouTube Channel ‘www.youtube.com/danreedvideos’ until the album ships on September 1st. This first track is based on the heart chakra and for the video I focused on honoring the animal kingdom we share this planet with.

Thank you for checking it out! Also all pre-ordered Limited Edition CDs sold throughout August on the Pre-Sale Link will be signed by yours truly 🙂

Thank you to Kateřina Bláhová, Janne Skip Sandin, Ian Kelosky, Graeme Purdy Bell and Dario Nikzad for all your talents in getting this album in shape and ready for release!